“A Typical Cavernoma Looks Like a Raspberry”: An Interview with Ailsa Crowe (Cavernoma Alliance UK) 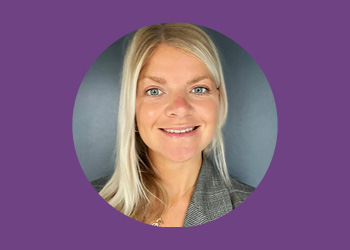 A cavernoma is a cluster of abnormal blood vessels, usually found in the brain and spinal cord. They are sometimes known as cavernous angiomas, cavernous hemangiomas, or cerebral cavernous malformation (CCM). It is a rare condition, typically looks like a raspberry, and is filled with blood that flows slowly through vessels that are like “caverns”. A cavernoma can range in size from a few millimeters to several centimeters across.

We got in touch with Ailsa Crowe, Digital Content Producer at Cavernoma Alliance UK (CAUK), to learn more about the condition.

First of all, what is a cavernoma, and which symptoms are associated with it?

The most common first symptom of cavernoma is seizure – many people live with epilepsy as a result of their cavernoma bleeding. Other predominant symptoms include haemorrhagic stroke and focal neurological deficit, like a stroke but without new bleeding on a scan. These in turn cause symptoms such as dizziness, slurred speech, double vision, muscle paralysis/weakness, tremor and numbness, which may also lead to extreme fatigue, memory and concentration difficulties, headaches, and other symptoms.

The severity of symptoms and persistence of bleeding determines the type of treatment available for cavernoma patients. Often, doctors consider the best approach to be what is called “watch and wait” where the behaviour of the cavernoma is monitored over time, and medication given to alleviate difficult symptoms. When the severity of symptoms and the risk of re-bleeding outweigh the risks associated with surgery, a doctor may recommend treatment, usually neurosurgery to remove the cavernoma, but sometimes Gamma Knife surgery (also known as stereotactic radiosurgery) – a less prevalent procedure that “zaps” the cavernoma with radiation. 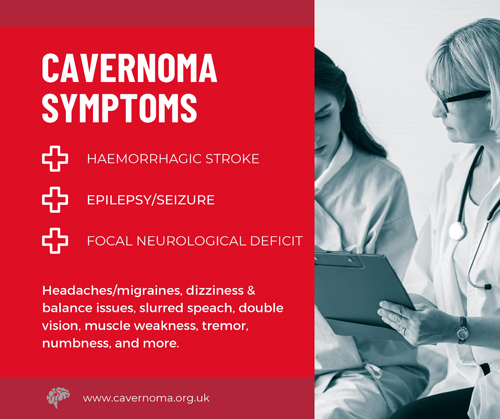 The CAUK Strategic Plan was approved at the January 2022 Board Meeting, with three parts: Care, Response, Cure. We deliver on our Mission via the five programmes of our Action Plan.

What is the physical and mental impact of cavernoma on those affected by it?

The physical and mental impact of cavernoma goes beyond what we could capture in just a couple of paragraphs. As with many conditions that affect the brain and spinal cord, the impact of the condition varies greatly depending on exactly where a cavernoma, or multiple cavernomas, are located. As we mentioned before, cavernomas can grow or bleed, causing devastating consequences – including haemorrhagic strokes, seizures, paralysis and sensory problems (to name but a few). Bleeds cannot be predicted, and there is no cure for cavernoma.

On top of having to manage the difficult physical consequences of a cavernoma growing or bleeding, the anxiety caused by not knowing when symptoms might worsen means patients often experience long-lasting mental health difficulties. A cavernoma diagnosis can affect an adult’s ability to maintain gainful employment, which can have devastating effects on financial stability and self-esteem. For children, diagnosis can severely affect their confidence, therefore limiting their ability to progress academically in school and make friends and socialise in the same way as their peers.

With only one in 5,000 people affected by symptoms, symptomatic cavernoma are rare. Those with the condition will seldom meet others with cavernoma (except through the wonderful cavernoma community at CAUK), leaving adults and children alike feeling isolated and alone.

Symptomatic cavernoma can be a sporadic or familial disease. When a patient has more than one cavernoma it usually indicates that they have the genetic form of cavernoma: There is a 50% chance that a parent with the genetic cause might pass the gene on to their child. Thus, in many cases several generations of the same family live with multiple cavernomas in their brain, many of which will cause difficult symptoms. It goes without saying that the many challenges associated with this familial strain can be devastating. Are there currently any trials being undertaken (such as the CARE study), and which new treatments for cavernoma are on the horizon?

Cavernoma is a rare condition for which research is relatively young. It only became possible to diagnose cavernoma with the advent of magnetic resonance imaging (MRI) in the 1980s. In those early days MRI machines were not nearly as common a resource as they are now.

Since there was no means for diagnosis, cavernoma was a poorly known condition – it was in effect a “new” ailment with no history. It is only gradually over the last just 4 decades that clinicians have learned to associate certain symptoms with the presence of cavernoma.

We are happy to report that research into cavernoma and potential treatments has gained significant momentum over the last years. There are a number of active research trials taking place as we speak, including the CARE study – for which CAUK is the patient group and was heavily involved in its design.

In addition to these RCTs, there is a substantial amount of cavernoma treatments which may lead to trials in the next year or so, in particular for biomarkers. Our sister organisation in the US – Alliance to Cure Cavernous Malformation – has, for example, recently announced their participation in early “animal model” research on the potential promise of focused ultrasound as a minimally invasive treatment for cavernoma.

We are hopeful for the future!

Please tell us more about the “CaverBuddies” mentioned on your website.

“CaverBuddies” is a Peer Support Scheme which matches up fully trained and DBS checked1 volunteers from our cavernoma community with people who are in need of support. With cavernoma, a rare condition that few people – even many clinicians – have ever heard of, we find that some of the best support comes from others affected by cavernoma who have a similar lived experience.

A person’s cavernoma symptoms and experience differ significantly depending on which part of the brain their cavernoma is in. Our matching process ensures that our trained volunteer and the person in need of support have similar cavernoma background and symptoms, so that the experience is as beneficial as possible. The “CaverBuddies” scheme helps people to navigate their diagnosis and cavernoma journey, feeling less alone and more in control.

1In order to be eligible for a Disclosure and Barring Service (DBS) check, a volunteer must be undertaking unpaid work for the benefit of an unrelated third party, with no intent to gain anything in return. They must also be working in a regulated activity with children or vulnerable adults.